My first contact with Ubuntu was in 2006, a little after the first Long-Term Support (LTS) version 6.06 (Dapper Drake) was out. Although it still feels like yesterday, 15 years is a heck of a long time. Things were a bit different by then, as the Canonical LTS offer was of about 3 years on desktop and 5 years on server releases - instead of 5 years for both as it stands to this date. They even sent free CDs to anyone in the world, including shipping, from 2005 to 2011 when the initiative was ended. This may look stupid now, but downloading a CD over a 56k dial-up connection (which was still a thing in multiple parts of the world) used to take over a day. Even ADSL connections were not that much faster, as the most common ones were around 256-300 Kbps.

It took me a few more years to use Linux on a desktop, which I did around the end of 2012, although I was using it on my servers at least since 2010 - the year I started to grab cheap VPS offers from LowEndBox. By 2013 I started to work with Herberth Amaral (which is also one of the most competent professionals I know), where Ubuntu was being used on the servers instead of Debian - the latter being Linux distribution I was used to. That didn’t make a huge difference, as both are quite similar when you don’t consider their desktop UI, but I still opted for Debian on my own machines.

This trend continued when I started to contribute to the Debian Project in 2014, where I used a Debian server as my primary development machine. But, except for this server that I still have 7 years later, almost every other server I had or company that I worked on used Ubuntu - except for one employee that used CentOS. So by the end of last year when I realized that this machine wasn’t getting security updates for almost six months since the Debian Stretch support was ended, I started to think why not just install Ubuntu on it. By doing that, I could forget about this machine for 5 more years until the LTS support ended.

To be fair, to say that I use Ubuntu on “almost every other server” is an understatement. Ubuntu is my go-to OS option on almost every kind of computing environment I use - except for my desktop which is a macOS since 2016. Ubuntu is the OS I use when starting a virtual machine with vagrant up, an EC2 instance on AWS or when I want to try something quick with docker run (although I use Alpine Linux frequently in this last use case). So opting for it on a server that is going to run for at least a few more years felt like a natural choice to me - at least until I faced their new server installer.

To give a bit of context, by being a Debian-based distribution, Ubuntu used the regular Debian Installer for its server distribution until the 18.04 (Bionic Beaver) LTS release, when it introduced the Ubuntu Server Live Installer. It didn’t work for me, as by the time it didn’t support non-standard setups like RAID and encrypted LVM. This wasn’t a big deal, as it was quite easy to find ISOs with the classic installer, so I ignored this issue for a bit. The old setup offered the features I needed and my expectation was that it was a matter of time for the new installer to be mature enough to properly replace the former.

Last year the new Ubuntu 20.04 (Focal Fossa) LTS release came, where the developers considered the installer transition to be complete. The notes mention the features I missed, so I thought that it would be a good idea to try it out. So let’s see how a RAID-0 installation pans out: 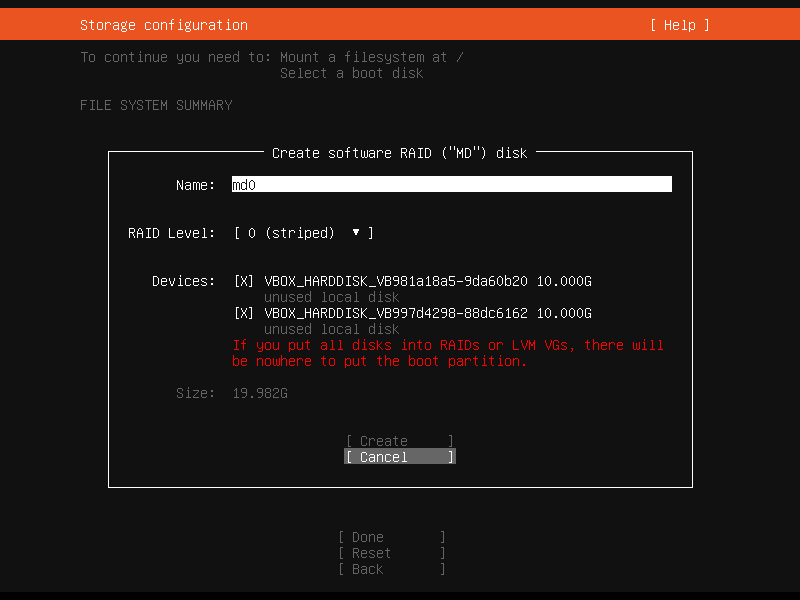 Wait, what?! What do you mean by If you put all disks into RAIDs or LVM VGs, there will be nowhere to put the boot partition? GRUB supports booting from RAID devices at least since 2008, so I guess it’s reasonable to expect that a Linux distribution installer won’t complain about that 13 years later. To make sure I’m not crazy or being betrayed by my own memory, I tried the same on a Debian Buster installation: 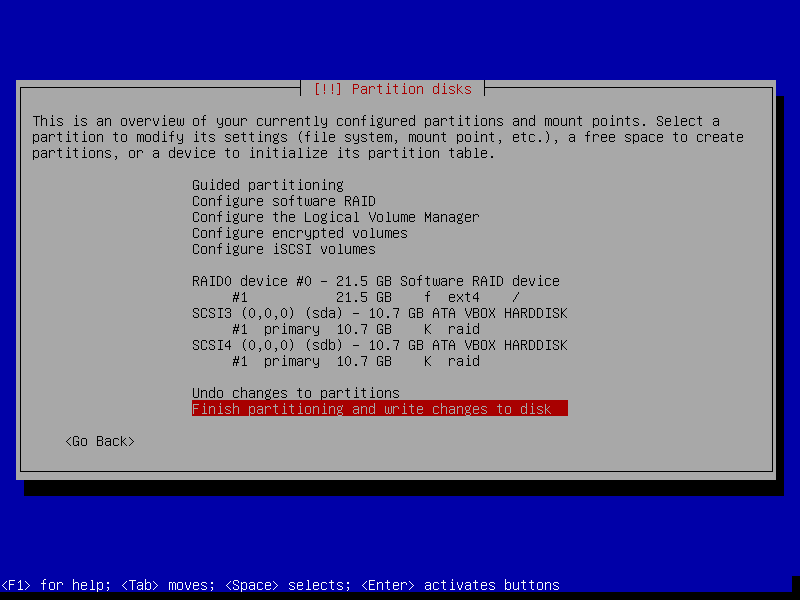 No complaints, no error messages. The installation went all the way and booted fine in the end. “Something is odd”, I thought. By comparing the two partitioning summaries, I noticed that the Debian one is using partitions as a base for the RAID setup, while the Ubuntu one is relying on the entire disks. I went back to the Ubuntu installer and tried to use similar steps. The problem now is that if the option Add GPT Partition is used for both devices, it creates two partitions on the first disk and only one on the second disk. So I dropped to a shell from the Live Server installer with ALT + F2 and manually created empty partitions on both disks with fdisk (cfdisk will do fine as well). After a reboot, I tried again: 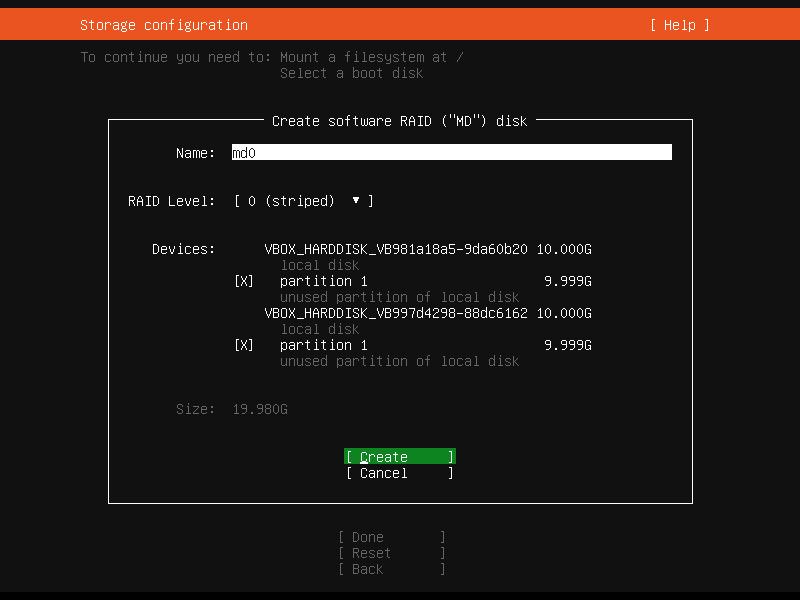 Well, the complaint went away. But after creating the RAID array, opting to format the newly device as ext4 and choosing / for its mount point, the Done button was still grayed out. Looking at the top of the screen again, the Mount a filesystem at / item was gone, so the last one that needed to be filled was the Select a boot disk. Clicking on one of the disks and selecting the option Use As Boot Device did the trick.